This year’s Cadillac V-Racing Top Gun Invitational was a huge success and we want to extend a HUGE thank you to Mike Franks of the Cadillac V-Club for organizing this truly first class event. The Cadillac community is extremely lucky to have someone like him showing this kind of support!

We’re proud to be a major sponsor of this event and we would like to thank all of the sponsors because without them it would not be possible! We would also like to thank the companies in attendance supporting the LF4 community as they continually help to push this platform forward.

For those ATS-Vs in attendance, it was wins all day! The Schmidty tuned ATS-V and V-Sport ran consistent times through the afternoon, Exodus Performance’s Purple Belt ATS-V they built got into the nines on it’s first outing and multiple Tapout ATS-Vs set personal bests!

• Bob C. ran low nines consistently and set the new World Record for the ATS-V 60 foot of 1.294 and new World Record for the quarter mile of 9.351 @ 142.32 mph! His car was losing belts due to a bad pulley bearing in his last runs so we didn’t get to make complete pass using the nitrous oxide, but stay tuned for more exciting things to come from this car!
• Heather S. made her way back into the nines running 9.98 @ 126 mph while getting on the brakes HARD trying not to break out against the 10.00 index. She broke out of course, but it’s hard to be upset running nines in her Purple Belt ATS-V! She was also runner up in the Tapout Tuning V6 Daily Driver Class.
• Jason W. ran 9.996 @ 136.17 mph at full weight on his first pass of the day and this was his very first time driving his car at the track! He also went on to claim the runner up position in the Tapout Tuning V6 Pro Street Class and won the Tapout Tuning V6 Daily Driver Class!
• Scott C. continued working on tuning refinements on our new CT4-V Blackwing and set a new World Record of 11.108 @ 127.21 mph! Current mods are somewhere between our soon to be released Blue and Purple Belt Performance Packages. All details will be released as soon as we finalize a couple more items.
• Spencer B. ran a best time of 10.946 @ 125.59 mph and is continuing to improve his launch technique!
• Jon S. beat his previous personal best of 10.785 running 10.603 @ 131.39 mph!
• Teddy K. made improvements to his ETA throughout the day running a best of 9.42 and winning the Tapout Tuning V6 Pro Street Class!
• Michael F. ran 10.61, which is within 0.01 second of his best ever time!

It was an incredible weekend of racing and we’re always thrilled to be able to sponsor events like this that help to bring the community together and push the platform forward! We’re looking forward to more events and a summer full of wins for the LF4 platform. Stay tuned because we promise you there’s a lot more excitement coming soon! 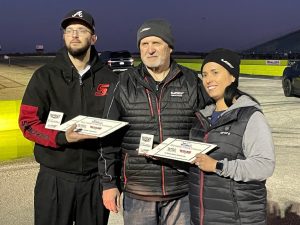