Congratulations to four Tapout team members who all set new personal bests at Dragway 42 on Friday.

Paul and Ethan Browning are new to drag racing, and they’re doing an incredible job learning how to drive for maximum performance. They improved their best time to 10.22 @ 132.7 mph. Paul holds a purple belt in Brazilian Jiu-Jitsu and his 2018 ATS-V is also equipped with its own Purple Belt. Being ranked within the top one percent of all ATS-Vs in all four major categories (dyno horsepower, quarter mile, eighth mile and 60 to 130 mph) is especially impressive with no weight reduction whatsoever.

Jorge Munoz drove his 2016 ATS-V in from Florida like he does every month, and set a new personal best time of 10.15 @ 131.9 mph running the Purple Belt Performance Package. He hasn’t added any new mods in the last year, and we love seeing this car running 10.1x to 10.3x consistently every time out.

Manny de la Cruz came in from Pennsylvania with his 2016 ATS-V coupe. We added Stage 2 valve springs, titanium retainers and camshafts to his existing Purple Belt setup, and on Friday he made four passes of 10.06, 9.91, 9.89 and 9.85 @ 136.2 mph. Saturday he went back to the track and ran 9.99 and 9.96 with a little more weight, in slightly worse conditions. Stay tuned as Manny shoots for 9.6x on factory turbos when better air moves in this fall.

Bob Cook doesn’t mess around. This summer he landed a great deal on salvage title ATS-V. It had minor flood damage and a blown engine. He installed a new GM long block and upgraded to our Brown Belt Performance Package. On Friday he started with a half track pass to make sure everything seemed safe. Next he made a 1,000’ pass, letting off a few hundred feet early, and still ran 9.70 @ 135.0 mph. At this point the car had some codes for fuel pump circuit voltages and we weren’t able to get them resolved at the track. We’ll work through the electrical issues and expect to see much more from Bob in the near future.

#StayTuned for more from the Tapout Tuning Team as we continue to push this platform further than anyone thought possible! 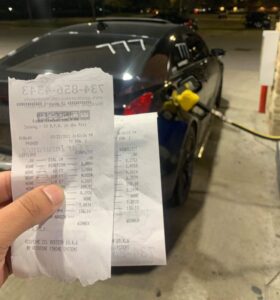 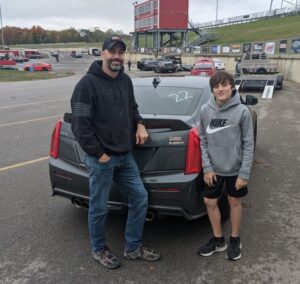 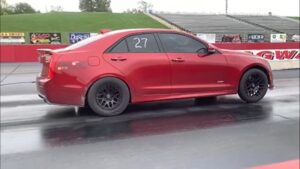