One of the many great aspects of having a Tapout Tuned ATS-V is that you can drive it every day with no worries of being stranded somewhere because of a problem with the tune. We take a lot of pride in the fact that we create a custom Remote Tune that’s as safe as factory specs and provides a huge boost in power and performance.

An example of that is in this week’s Tapout Tune of the Week, Sean from Arizona. He previously had his ATS-V tuned by another prominent company but right after he started to drive it he wasn’t happy. The power delivery was not smooth, and he was disappointed in the car’s overall drivability. This was a major issue for Sean because his ATS-V is his daily driver and he did not want to be dealing with these kinds of issues. He made the decision to have his car Remote Tuned by Tapout and he has been thrilled ever since. “I was so much happier with the all-around performance. The boost is more consistent early in my powerband, the transmission no longer throws me against the steering wheel when I shift, and overall I could not be happier with my Tapout Tune.” That’s what it’s all about for us at Tapout, turning your daily driver into a true performance vehicle, with no sacrifices. 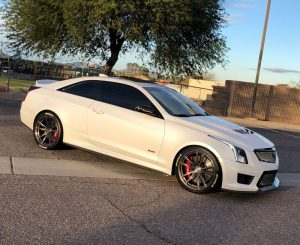