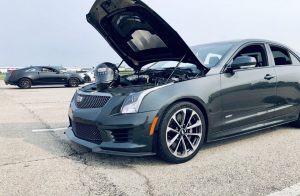 Scott Cook of Tapout Tuning, a long-time acquaintance since my 3800 days when I was a young 20-something, has delivered to me something extremely enjoyable for my ’17 Cadillac ATS-V. I utilized his tuning and performance-parts recommendation for my daily driver after I was unsatisfied with the near-end result I was arriving at with my prior tuner/speed shop. Before the Cadillac ATS-V, Scott tuned and fabricated parts for the Grand Prix that acquired him many “firsts” in the group. He was praised and despised for that fame. I happened to be, at first, on that ‘other’ side. After my experiences with this current platform, I can now attest to Scott’s commitment and passion toward the LF4 and ATS-V.

I had been enjoying my ATS-V as a daily driver thru the winter and then as also a summer-time HPDE car (my first HPDE experience). My previous tuner gave me a monster tune which had huge peak numbers…but was quite rough and difficult to handle on the track. Lots of hiccups and stumbles amid giant gushes or power than would upset the car in turns and hiccup in high gears at wide-open throttle. It was a riot, granted, and I was so overwhelmed by the power that I was near-fearful of the unpredictably and suspicious of some desensitizations that would allow such power. On top of that, these issues remained issues because I was paid slow attention.

Scott re-entered my automotive enthusiast scene. A few phone calls with him convinced me to give his services a try. They were not without effort and commitment, however. He recommended extra items (wideband O2 addition, fuel pump & spark plug modifications) that added expense on top of my existing modifications. On the flip side, he did not “over-sell” me on any unnecessary parts. In fact, he harped that many OEM components on this car are far superior to other company’s aftermarket performance parts. After a few very educational and enjoyable conversations, I was sold on his ability to improve the aspects of my car that I was concerned about. I obliged with the extra items. As a surgeon, I equate it to “getting few extra tests” before your surgery. The wideband O2 sensor is like “bloodwork” for your combustion. It allows him to perform the necessary sequential tuning updates needed to safely maximize and optimize the performance of your LF4. Without these types of enhancements, he would otherwise be tuning blind.

We began with data collection and a baseline dyno run to see where we were starting at. After that, I collected a series of street-scans using HP Tuners. He would then email me updated tunes to safely bump up the power and work on drivability issues, such as shift timing. We arrived at a decent, safe spot to return to the dyno. This time, we spent about 3 hours with the car on the Dyno where I would email him the data scans and power charts for him to study and then modify the tune. Remotely, he would work his magic and email me back the updated tune that my local speed shop would then help me flash to my car and run another dyno pull. After achieving as much safe power as we could, I checked his work with a street run. The car pulled insanely hard, however was very controllable and extremely confident. It is of course subjective to say, but I could instantly tell that this new Tapout Tune was what I was looking for.

**It should be noted, Scott does not prefer to sell and deliver a “one-and-done” canned tune. Nor is that method the most enjoyable with this platform. After going through his method, I had so much fun and learned so much!**