I would like to preface my review with a general statement. With the ongoing pandemic lasting beyond expectations (at least my own), the mass of people have been forced to become online consumers. As such, I’m sure we have all to some extent experienced the inconvenience of having to call customer service, IT assistance, etc.

When I purchased my remote tune from Tapout Tuning, Scott not only served in all of the aforementioned roles, but fulfilled them flawlessly. I reached out to Scott on a Friday evening with my first ECM scan, and received a response that same evening.  The following morning (Saturday) sent a follow up scan, and received a response within one hour. My final fine tune occurred subsequently on Sunday, and again within an hour received a response to both my inquiry and updates. The directions I received with my tune were so easy to follow, that someone such as myself who has never used HPTuners interface before was able to seamlessly perform the necessary logs and updates! Tapout tuning’s attentiveness to customer concern/feedback is by far the greatest experience I’ve ever had, both in automotive care as well as general customer support.  And for that they deserve five STARS!

Now to the tune. I bought my 2016 Cadillac ATS-V a year ago and was enthralled by the styling and the possibilities. To put into perspective the other cars I test drove and was considering: Jaguar F-Type, BMW M4, and a Camaro SS. The Cadi just stole the show for me. Within the last year of driving the car, I definitely felt more agile and quicker than my previous vehicle (IS 350 AWD) but it just didn’t seem like it was putting out it’s full potential. When Scott sent my tune over it was a rainy day here in Charlotte, NC so I had to be mindful of my boost levels…so I could feel that my shifts were much more crisp but couldn’t tell a gain in horsepower. The next day it was sunny and man-oh-man I don’t think there are enough smile emojis to explain that day!!! The car is a night and day difference. It pulls from 1st to 4th (highest I’m willing to go as I’d like to keep my license) with sharp shifts and an ENORMOUS difference in pull. I literally could hear my tires chirping each gear as the HP increased significantly through each gear. I ran the ATS-V with my brother’s 5.0, and I’ll just say I’m mentioning this story because the outcome was obvious. This is how the car should be, and how GM should have made it. It’s like my car was factory tuned to play Air Supply and Scott tuned it to AC/DC. I have other parts from Tapout Tuning I am adding later this month and can honestly say I cannot wait. If you are on the fence about who should tune your car, let me save you the trouble. If you are considering parts for your car, again let me save you time on research. TAPOUT TUNING.

Scott and team, I am thankful to all of you for your support and superior products. GO TO TAPOUT TUNING! 5 STARS. 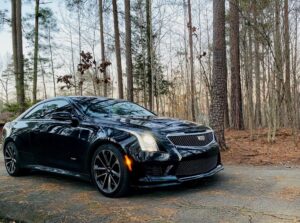