This week’s Throwback Thursday features Scott Cook’s 2008 Pontiac G8 GT.  Scott purchased the car new and installed a twin turbocharger kit within the first two weeks of ownership, years before any aftermarket fuel systems became available. Why stay stock when you can make more power? This car was the first G8 to run in the tens and had substantially more potential with 723 whp. To accomplish these incredible numbers Scott modified his G8 to run a pair of Mitsubishi turbos mounted at the bottom of the engine compartment with a modified APS kit. These were paired with a twin TiAL 38mm external wastegates regulated by an AEM Tru-boost and routed through an APS intercooler to reduce the risk of detonation. And to polish it off this G8 ran a dual three-inch Magnaflow exhaust for a menacing growl on the street.

To overcome the restrictions of the stock fuel system Scott’s team fabricated a custom return-style system. This included Siemens 60-pound injectors with modified LS7 fuel rails, an Aeromotive pressure regulator along with a pair of Walbro GSS392 inline fuel pumps linked to a custom four-gallon surge tank mounted in the trunk. A large pair of large -6 AN line delivered the high fuel demands to the engine, working in conjunction with a single return line. Put this whole package together and you have one hell of a daily driver, ready for the street or the track. Check out the link below to see Scott’s G8 featured in an article of Super Chevy. (article and photo courtesy of Barry Kluczyk) 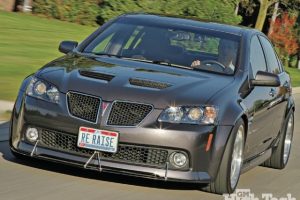